If you’re reading this you are probably up to speed on digitization. But are you ready for digitalization?

Although the two words may sound similar, there is a notable difference in digitization versus digitalization – and that ambiguity has created uncertainty even among IT professionals. In this article, we’ll try to clear up the confusion.

A deep dive into Google Trends from 2004 to 2020, reveals that digitization and digitalization are nearing parity in Internet searches. This convergence mirrors key milestones in the Digital Era, as increased digitization opens the way for digitalization. 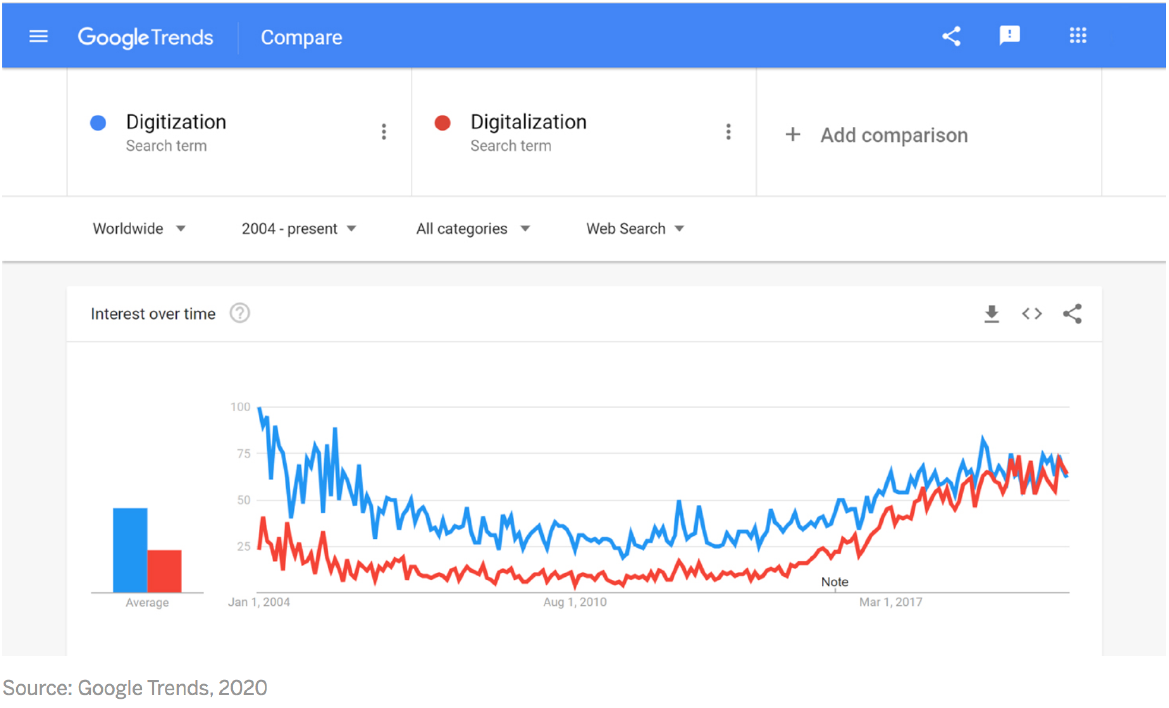 Digitization is a relatively straightforward concept to understand. Any time you translate something – for example, by scanning a photo or a document – into bits and bytes, you are digitizing that object. Scanning a document into a digital archive creates a digitized version, encoded with ones and zeroes, without altering what is written in the document or activating it in a process.

The Gartner Glossary offers this definition: “Digitization is the process of changing from analog to digital form, also known as digital enablement. Said another way, digitization takes an analog process and changes it to a digital form without any different-in-kind changes to the process itself.”

It is worth noting that Gartner has been consistent in this definition over the years. That’s because digitization has been with us for a long time. “A Very Short History of Digitization” traces the origins of digitization all the way back to the development of binary arithmetic by Gottfried Leibniz in 1679.

Digitization took off with twentieth-century computing and its requirements for data storage, processing, and transfer. This shift from mechanical and analog electronic technology to digital technology is the driving force of the Digital Revolution, also known as the Third Industrial Revolution. To understand how pervasively digitization has already permeated our lives, consider this fact: in 1986, 99.2% of the world’s storage capacity was analog; however by 2007, 94% of the world’s information storage capacity had shifted to digital. By no small coincidence, the figure from Google Analytics shows a distinct drop in Internet searches for information on digitization by 2007.

Does that mean we are almost done with digitization? Not hardly. A recent Tech Tip from the New York Times for World Backup Day recommends digitization as a way to safeguard your most important papers, photos, and documents. As illustrated by banking with ATMs, telecommunications with mobile phones, grocery stores with bar code scanners, music and entertainment with CDs, MP3s, and DVDs, digitization has become synonymous with the convenience and reliability of modern life.

The upfront effort required to digitize objects and assets positions businesses and industries to carry out digitalization. Data from throughout the organization and its assets is processed through advanced digital technologies, which leads to fundamental changes in business processes that can result in new business models and social change.

The Gartner Glossary says: “Digitalization is the use of digital technologies to change a business model and provide new revenue and value-producing opportunities. It is the process of moving to a digital business.”

It is noteworthy that the rise of digitalization coincides with the acceleration and mass marketing of new digital technologies, like cloud computing, machine learning, artificial intelligence, business intelligence, and the Internet of Things, in the last decade. Emerging digital technologies are fundamental to advancing automation in the Fourth Industrial Revolution, a term first introduced in 2015 by Klaus Schwab, executive chairman of the World Economic Forum, and the 2016 theme of the World Economic Forum Annual Meeting in Davos, Switzerland.

In the figure above, we can see a distinct and consistent uplift in Internet searches for information on digitalization in recent years.

Benefits Or Advantages Of Digitalization

Aided by automation and digital technologies, businesses can unlock new value from data that has been aggregated through digitization, drive organizational change, and create new business models. These are the benefits of digitalization. The overall effect of digitalization across an organization is called digital transformation – more of a process than an outcome.

Why Is Digitalization Important?

The technologies underlying digitalization continue to evolve rapidly, even as they are being adopted throughout business and society. Digitalization, however, is not simply a matter of “more technology.” Digitalization is important for an organization because it unlocks new thinking and approaches in how the organization perceives its role within its ecosystem and its opportunity for increased profitability. The technology is not an end in itself.

With digitalization in place, these organizations can begin to create new value chains and experiences that are collaborative, interactive, sustainable, and profitable.

Here are some examples of enterprises that have used digitalization to transform their organizations into best-run businesses:

Customer experience: The Entertainer, the UK’s largest independent toy retailer, has the vision to be the best-loved toy store one child at a time. SAP Commerce Cloud is helping them to understand their customers, so that they can consistently deliver a five-star experience.

Mobility: Porsche is accelerating a new era of digitalization with an integrated system landscape to drive innovation in manufacturing, logistics, and customer service. Investment in new technologies is keeping Porsche ahead of the curve in meeting consumer demand for the latest mobility solutions while staying true to brand.

Sustainability: TemperPack, a sustainable manufacturer, has seen a 40% increase in requests for its plant-based, curbside recyclable packaging, favored by its customers to deliver perishable foods and temperature-sensitive medicines. To meet demand, the company is using real-time data from its digital business platform to improve decision-making, streamline operations, and reduce response times to customer inquiries.

Is your business on the path to digitalization? If so, where did you begin? Most organizations begin by bringing together all data from across the enterprise into a centralized and integrated enterprise resource planning (ERP) system, where the data is collated and harmonized to provide a “single source of truth” about the state of the business and individual business processes. The benefits of an ERP system include greater efficiency, modern business process standardization, and improved visibility into the business data, which leads to faster decision-making based on better data.

Next-generation cloud ERP solutions deliver these business insights in real time to enable enterprises to rapidly adopt and modify processes and models in response to ever-changing business conditions. New opportunities to rethink business emerge, as organizations take these initial steps in their journey toward digital transformation.